How ‘they’ kill the World

Posted on January 1, 2013 by denebsumbul

How ‘they’ kill the World – written by Najma Sadeque

What every taxpayer, refugee, and second-class citizen should know about the globalisation of militarism. 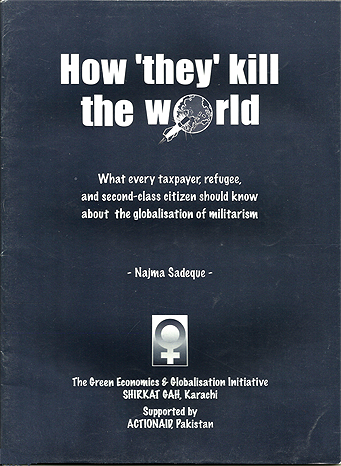 There has always been pecking order and hierarchy in human society, sometimes accompanied by a belief in the superior-inferior heritage. But that didn’t necessarily translate into outright aggression. It was the invention of the gun in the mid-15th century that led to all hell breaking loose.

The professionalization of armies began in 17th century Europe, but even then, soldiers were more attracted to booty and duty. The bourgeoisie and the peasantry were exempt as some had to continue with production and trade and pay taxes. So the army recruited mostly among the unemployed. It was different in South Asia; forest-dwellers refused to fight even among themselves, but a hard-pressed peasant could seasonally change occupation outside harvest time.

Later when employment opportunities improved, other lures had to be found for volunteering to risk their necks.  And so military service was generously endowed with the glamour, status, privileges, security, good pay and perks in an irresistible package that pandered to heroic, macho-images of protecting the people. – Except that they don’t seem to be around when civilians are bombed on their behalf.

Today indoctrination is widespread, but soldiers suffer more for their heightened sense of duty, even if they are not clear what they are fighting for. Militaries have become status symbols for some nations, even if they have to starve their people for it. Just a decimal point of such profligate spending could wipe out all the hunger and deprivation in the world.